In distribution systems for industrial water, old steel pipelines are often still in use, which in most cases are not or poorly protected against corrosion. Microbial corrosion or MIC is a specific form of highly localized corrosion that is highly unpredictable in both location and time. It can occur on the inside of pipes in a water distribution system, but then it is often only detected after a leak has occurred. In order to determine the exact cause of such spills, targeted research must be carried out in a case-by-case manner.

The damage investigation clearly showed that internal corrosion had occurred in the pipes in the form of corrosion pits that also pierced the pipe wall in a number of places. The perforations and pits were always located under so-called tubercles, these are layered accumulations of corrosion products, sometimes several centimeters high. Microscopic examination (SEM-EDX) showed that certain layers in the corrosion product contain sulfur. Close to the perforations in the tube, bacterial populations were found in which sulphate-reducing bacteria were emphatically present and active.

Since in this case it concerns damage occurring under a biofilm and thick layers of corrosion products, it is recommended to tackle the MIC problem with a biocide with a relatively long residence time in the pipe system. Such an agent can penetrate better into the biofilm and layer with corrosion products and thus exert its effect. In addition, a recommendation has been made to set up a reliable corrosion monitoring system with which the effect of the biocide dosages in the pipe system can also be monitored. 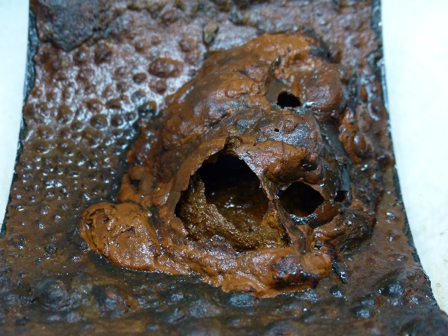 By proper analysis, the cause of such corrosion-related problems can be identified and a sustainable solution / improvement can be worked on.